When you start breeding purebred dogs, you intend to obtain puppies whose characteristics as close as possible of the ideal dog. For a braque du Bourbonnais, you will want to have a dog with short tail, with a coat color being peach blossom or faded lilac, without big spot, etc… And moreover, your dogs will have to be good hunters.

You will be able to say that you have done good work when you obtain litters as homogeneous as this one (from Julius de la Croix Saint Loup and Erika de la Bénigousse): 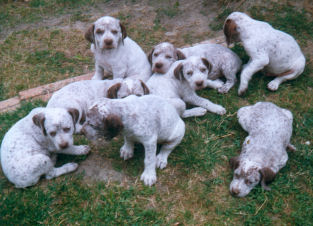 If your goal in breeding is only to produce balanced dogs, without specifically making champions, or that you only want to make one litter with your bitch, to keep a puppy and giving others to your hunter friends, then let's be clear: don't use inbreeding, you will have a litter much less homogeneous, but your dogs will have much less genetic problems.

You can go to a breeder's, choose in a litter a bitch that seems to have all the desired physical characteristics, study the field trial records of the parents, and bring her back to your place. You only have to choose a sire with the same characteristics; you will have all the odds on your side for producing nice puppies…

Alas, it is not so simple…
If you choose your livestock only from their phenotype, you don't know much about their genotype. A lot of recessive genes are not visible in your dogs but will appear in their offspring.
In fact, you will be very lucky if you obtain good results with such a method. Especially if you get your bitch from a professional breeder, the chances are low that he sells to you a bitch that he thinks will have nice offspring; he will keep her for him.

One solution could be to choose your livestock on the characteristics appearing in their offspring. Then, instead of doing a choice based on the phenotype, you do your choice based on the supposed genotype.
This way has more chances to be satisfying, but it has big drawbacks: you will have to wait for a bitch to have made several litters, whose puppies became adult to choose her. Difficult to find.

So, if you want to breed, you will have to start with a bitch whose genetic value you probably don't fully know, and patiently improve this value, one generation after the other. If the bitch is nice and she is hunting well, she has got genes interesting for you; you only have to reinforce the presence of those genes in your livestock, while removing the hidden genetic defects, which will surely appear one day.

In fact, reinforcement of wanted genes and elimination of unwanted genes are done with the same technique. In the two cases, to get to the result, on is going to increase inbreeding, and select the offspring.

You thus have these thousands of alleles, which are arranged randomly if your dogs are not inbreeded (all the pedigree dogs are a little inbreeded, but one will neglect this inbreeding which you didn't control). While increasing inbreed, you will sort these gene by putting two by two the similar alleles. Some recessive characters will arise, you will eliminate the bad ones and will keep the goods ones.

Alas, it will be difficult for you to obtain dogs with all the good characteristics and none of the bad ones. The bigger the inbreeding will be, the more dogs will have crippling defect. When you litters give you only damaged dogs, it will mean you have gone too far. But this time will arrive latter if the genetic inheritance of your starting dogs in good.

We will see now the different strategies of inbreeding, but first, we will recall two fundamental rules never to be forgotten:

-One must use inbreed only with good, even very good subjects. If the starting genetic stock of your dogs is not good, inbreeding won't improve it.

-The higher inbreed is, the more severe selection must be, or to make great wrong to the breed by diffusing damaged subjects.

The puppies obtained like that have every chance to look like their father, which was the goal. However, this method will lead you in one generation to a percentage of inbreeding F (COI) of 25% (see"How to compute and inbreeding coefficient" for the computation), which is high, hence the risk to have no good puppy in your litter.

However, this way of doing high inbreeding can be used advantageously in a test purpose: when you have a very good subject doing well in show and field trial, having him doing a litter with high inbreeding can be useful to reveal his defects before using him a lot. If this litter reveals serious defects, you must use your dog taking this fact into account; otherwise you would widely spread this defect in the breed.

If you are less in a hurry, you will wait one generation more, and have a litter with the champion and his grand daughter. Then, F will "only" be 12.5%, and you will always be able to add a proportion of the champion's genes by crossing the puppies with a son or daughter of the champion, which will be their uncle or aunt. This way of doing by small steps seems more cautious, but of course it takes more time. Still it enables you to minimize the chances to have a totally screwed first litter, which unfortunately often happens when one use inbreeding.

Another strategy is to marry individuals in the same generation.

Here also, the most inbreeded marriage, brother/sister, will bring you the fastest results with however great risks to fail. Before starting, it is essential to be sure that both parents are very good, even exceptional, and even that their parents are worth it. Indeed in this case you do inbreeding at the same time on the mother and on the father of your dogs.

But if your two dogs are very good, and their parents are also good, one can ask what you are still looking for.

More wise also is to marry half brother and half sister, giving a coefficient F less high, and enabling you to maximize the presence of genes from one special dog, the father or the mother that your dogs have in common, who is exceptional.

Ok, let's admit that you succeeded to obtain a nice dog with a high inbreeding coefficient. What do you do now?

You look for a bitch, nice too, which is the less inbreeded that you can with your dog, being inbreed her self, and you have a litter with the two.

As your dog is very inbreeded, he breeds true, meaning that he produces puppies identical to him (or almost). If the bitch you have chosen is also very inbreeded, she also breeds true. So you have maximized the chances that your puppies look like the father or the mother. Thus, if the two parents are nice, your puppies should be nice.
Why choosing a bitch which is not inbreeded with your sire? Because you did a lot of effort to obtain this very inbreeded sire, so you know that each inbreed increase leads to some problems. So, if your sire really breeds true, no need to take the odds trying to do more; the low inbreed dogs are often more mentally balanced, and are less sick. So those are the dogs that must get out of your kennel.

In the Bourbonnais, given the low number of individuals in the breed, you will realize while studying the pedigrees that you don't need to do much effort to have inbreeding. All the dogs that we have today are from a few dogs that I happen to have known and which were not without defects. Generations of selection enabled us to have nice dogs, but the number of really valuable livestock is not very big. In its best period (middle of the 90s), the breed reached 170 puppies a year. Today, we are around 100 puppies a year in France. So we are all inbreeding, only directing this inbreeding towards the best dogs.

We have seen how to increase inbreeding, let's try now to see how to decrease it. This can be useful too, when one reaches a point where each litter shows some defects in the puppies. In fact, if you breed during many years, you will sure go through this process. Preserving the genetic diversity in the breed is essential, and the goal "100% homozygoteous" cannot be reached because many genes, inoffensive in their heterozygoteous form, are lethal in their homozygoteous from (this explains why the number of puppies in each litter decreases when the inbreeding increases).

So you have done too much inbreeding, and you are looking for new blood, go to the next chapter about out crossing to know how to do.