Definition of the couple contest:

Dogs can run in "solo" or in "couple". In this last case, the dogs do their run at the same time.
The final of "solo" tests, giving the right to the CACIT is ran in couple, between two dogs which got the CACT.
In this case, the quality of the dogs is compared not by opposing them so that they eliminate each other, but by judging their run in relation with the standard of each breed (pace, width of the search, gallop...).
In fact, the solo CACIT is ran in couple, paradox which enables to judge the psychological balance of the dog.
The two handlers, placed neck and neck, will send their dog in opposite directions so that their searches cross each other. 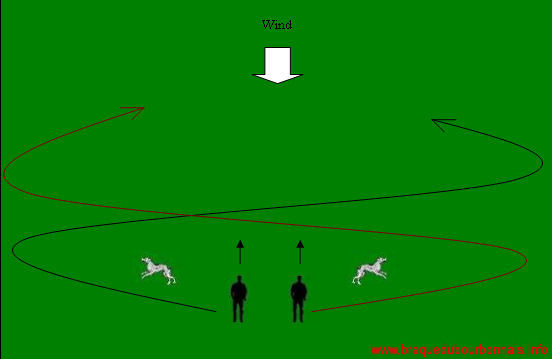 When one dog is pointing, one does not want his brace mate to disturb the point, he must do what we call "backing" (or "honor") him, i.e. pointing and let the other dog finish his point.
Anyway, two forms of "backing" exist:
- if the second dog is inside the emanation cone when the first one points, one can speak of "backing (pointing)", as he smells the scent.
- if the second dog is not inside the emanation cone when the first one points, it is out of question that he points, because a pointing dog must always point on nose, not on sight. In this case, the second dog will do what we can call a "backing (respecting)", deliberate and well thought action of the dog which stops (it is not rare that the dog sits down).