For the 4th year in a row, the Bourbonnais gathering in the USA, organized by Mary et Larry Friedricks from Cactus Country Kennel was a succes, with 18 dogs presents: 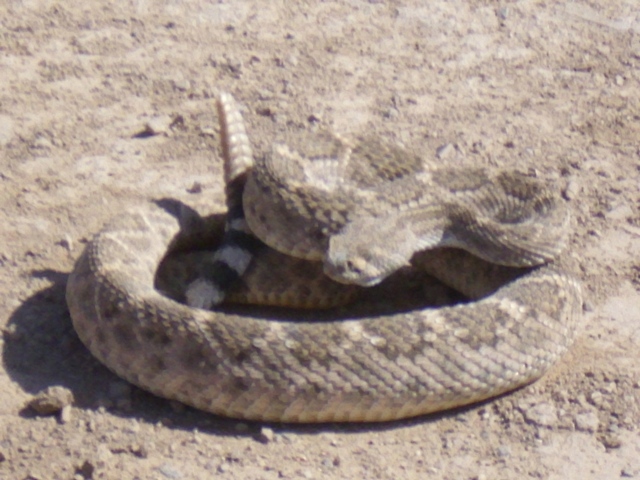 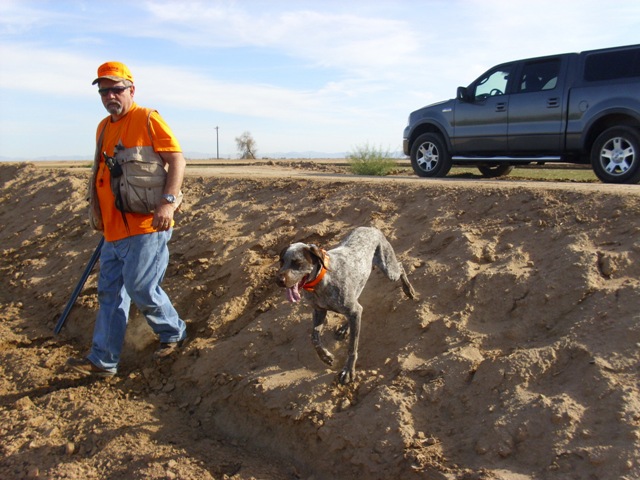 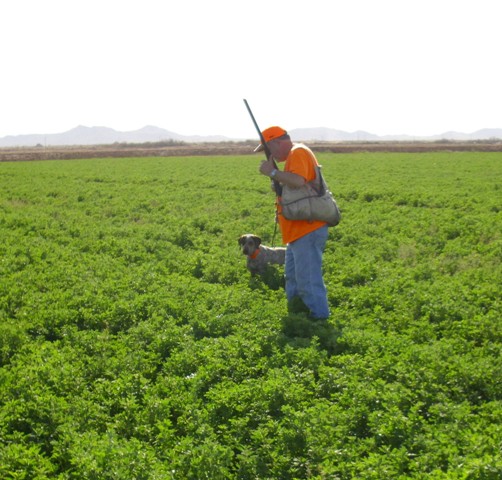 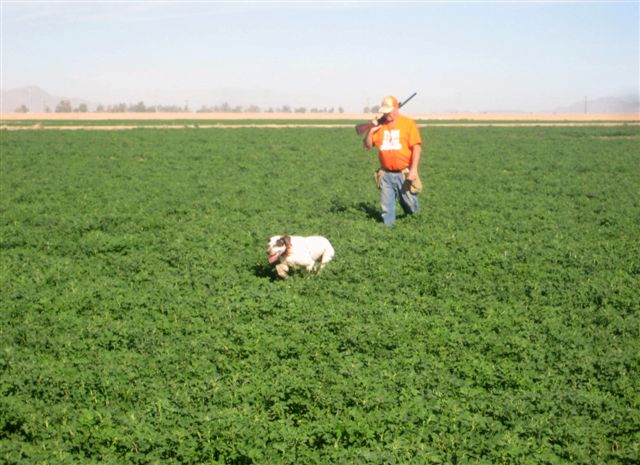 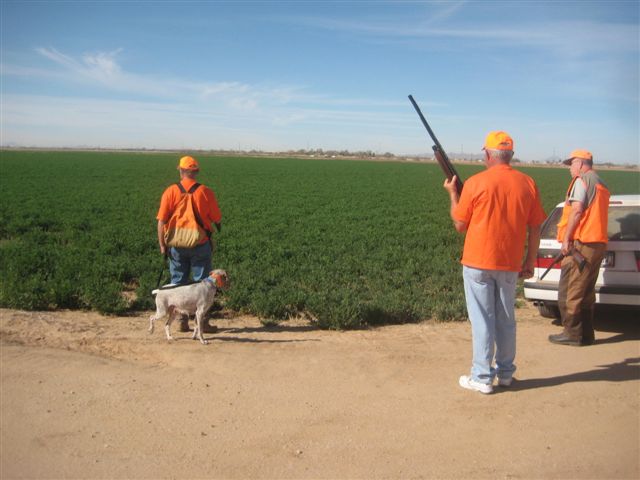 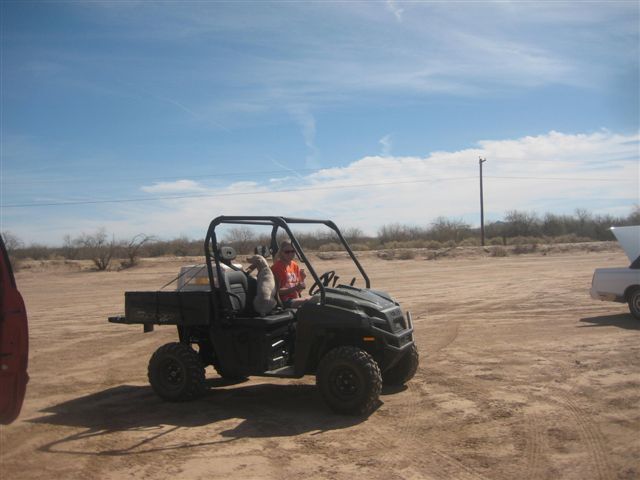 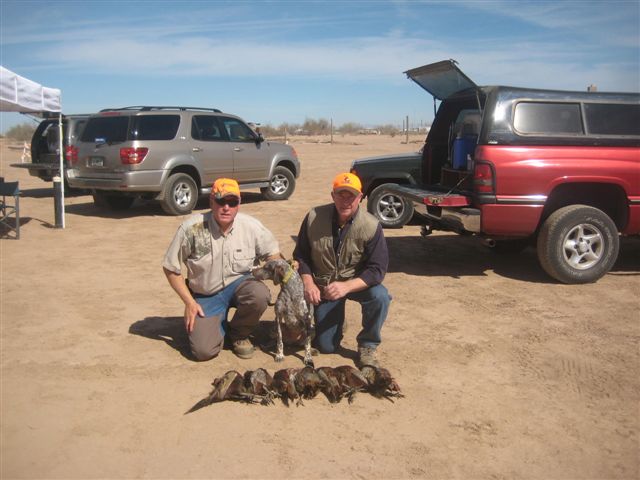 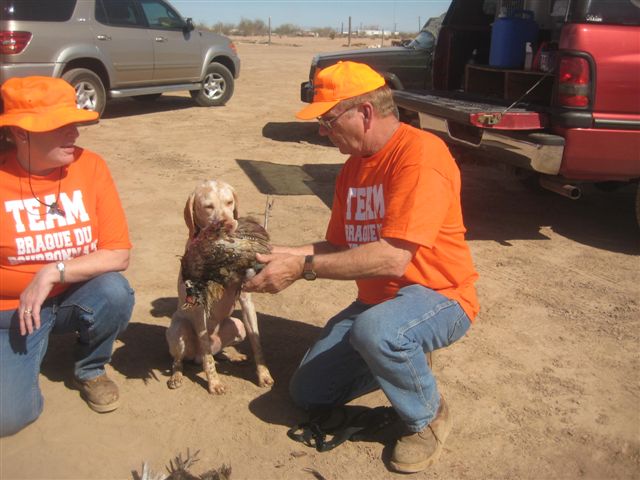 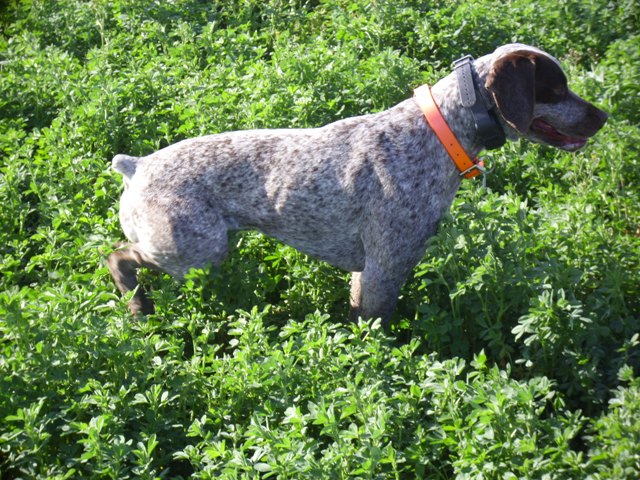 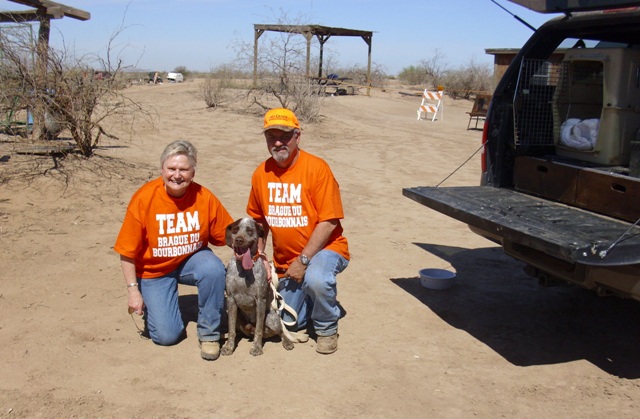 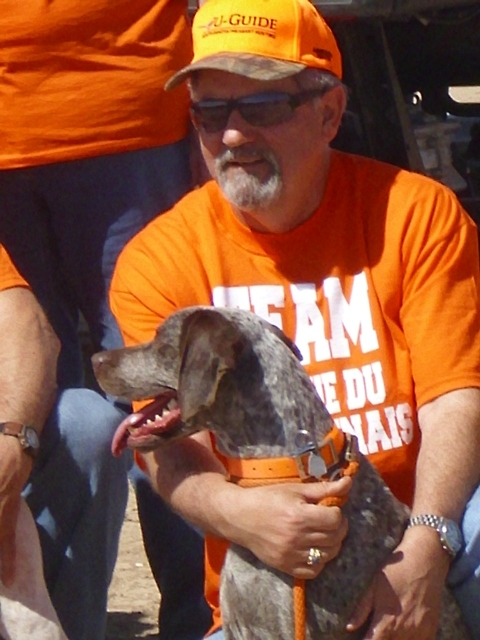 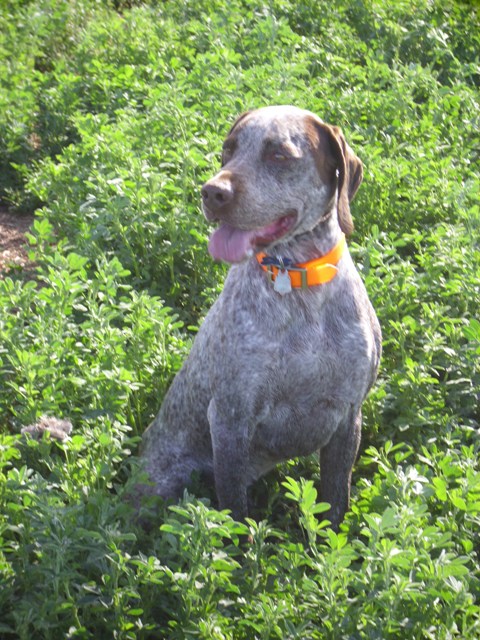 The 1st was held in Tollhouse, CA with just 5 Braque du Bourbonnais: Maya, Demi, Samantha, Ellie, and Fletcher. Bryce Mann was our host in July 2007 The second was held near Nogales Arizona with dogs from California and Arizona this was 2008 and we had a few more dogs.
The 3rd was held in Helm California with 9 Bourbonnais (2009).
This year was the 4th (many thought it was the 3rd) and it was held in Coolidge Arizona with a record number of Bourbonnais, NNN. This Rendez Vous was organized by the wonderful folks at Cactus Country Kennels (CCK), Mary and Larry. CCK provided all participants with “Team Braque du Bourbonnais” T-shirts, coffee mugs and CCK blaze orange hats which were completely unexpected and wonderful gifts. We had dogs from Michigan, Arizona and California. The kennels these dogs came from were from Canada, France, Nebraska and of course Arizona. I was happy to have been able to hunt my dogs with dogs from various Kennels and see their hunting style training etc that these dogs displayed. The dogs were getting along wonderfully, all getting on birds and having a great time on the field. Larry divided the various hunters into 4 hunting parties. Our group was hunting with four hunters (people with shotguns) and never less than 5 dogs on the field at once, the pheasants did not have any chance of escaping except for some less than accurate shooting a few times. Wwe did not have a single problem with this many dogs on the field until one of us shot a bird that did not die right away. This bird had been pointed by Brock with most of the other dogs honoring or backing. When the bird hit the ground Brock was there to grab him but the bird flew a few yards into the awaiting Fletcher who jumped and grabbed it in the air. As Fletcher came back on the ground Brock was right there to claim his bird. So now we had Brock holding one side of the bird and Fletcher nose to nose about ½ inch from Brock holding on to his half. So now we had 2 males, neither of which is neutered, testosterone on high, adrenaline on high, nose to nose, one bird in two mouths, neither wanting to release the bird… a scenario for disaster…I know you are thinking how bad was the dog fight and how bad were the injuries. After more than 30 seconds of both Larry and I, from a distance, calling our dogs, Fletcher decided that since Brock had found the bird and it was Brock right to retrieve it. Fletcher released the bird and went hunting. No fight, good dog, good dog!! Smile came back to our faces. Brock, happy as could be, retrieved the bird back to Larry. No problem. This is one big happy hunting family. We had the pleasure to meet several of the owners and each in turn was nicer than the other, and all of them are thrilled with their dogs. Many of the spouses were there, some hunted some not but all were very proud of being companions to these wonderful dogs.
As it turns out the club where we were was holding a snake break clinic. This is a very important part of training in the Western US. Some of us also vaccinate our dog for rattle snakes. So don't be alarmed when you see the picture of the rattler, no dogs – or snake – were injured during training.
I thought it was real kind of Larry and Mary to set up this hunt on Fletcher's 5th birthday, that was Fletcher's birthday present and he loved it!
I am already looking forward to next year's Rendez Vous and I know we will have even more Bourbonnais attending.

Bonnie and I had a wonderful opportunity this last weekend to meet and greet with the very small cadre of folks that own Braque du Bourbonnais dogs. To tell you how small and unique this club is, my dog is registered as #504 in the USA. He is now four years old so I am sure that there are a number of other breed representives since I got him but I would bet that this is one of the largest outings for these dogs in the US today. We had about 15 - 20 dogs participate (all of which were BdB's) which I thought was pretty great. Without fail, all of the owners seem to be very satisfied with their choices and are, as you can imagine, "slightly" biased in favor of this breed. This breed has a lot going for it, they are a dog you can live with (we do), they are extremely affectionate; they are a great size (ca 50 # for a big male, maybe 35# for a female) and they will hunt their hearts out for you. That's a pretty tough combination to beat. So knowing my biases, I thought I would share a few pictures with you.
Most are of either of BJ (short for Brock Jr - Guess what, his Dad is named Brock from Cactus Country Kennels in Tucson, Az, a few of the "chickens" he found last weekend, and one extraneous "critter" that was being used in a snake break clinic next door and one or two containing Bonnie , me and BJ. I leave it up to you to tell the difference, especially because BJ and I have almost the same "chin" color. BJ was incredible this weekend and I couldn't be prouder. We had 5 roosters planted in a 10 acre alphalfa field (I'm guessing) in the morning and another 5 planted in the afternoon, The alphalfa was a perfect height and the birds were really well hidden. BJ found and pointed (solidly) the first 5 birds in the morning in about 10 minutes and then, under much more difficult scenting conditions, due to an 85 degree plus temp in the afternoon, did a repeat performance and found the last 5 just as quickly. I didn't embarass myself by shooting too poorly and we ended the day with a perfect 10. The birds were beautiful, the day was beautiful; the points were fantastic (10:10); and we had a great time. What a fantastic day!!!